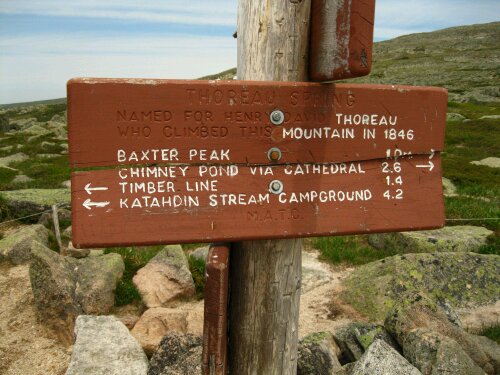 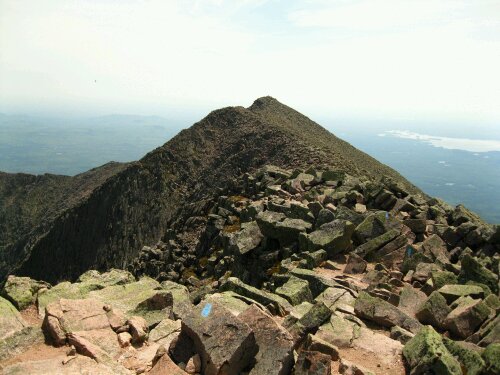 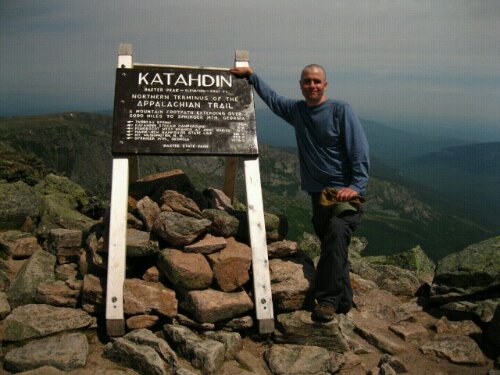 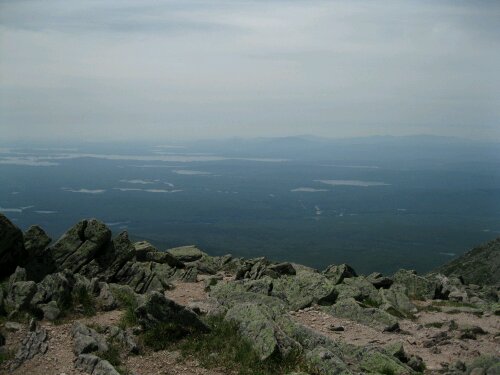 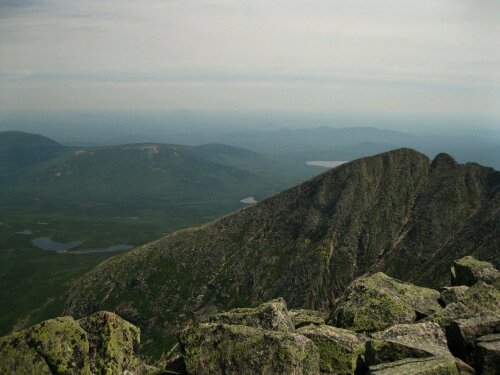 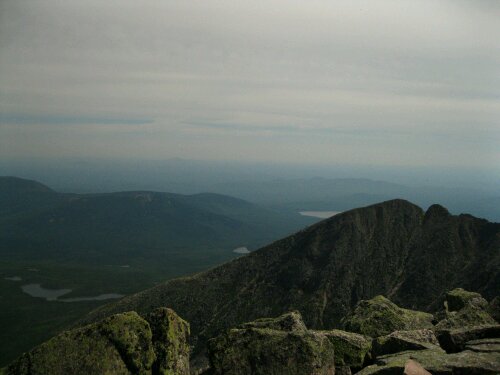 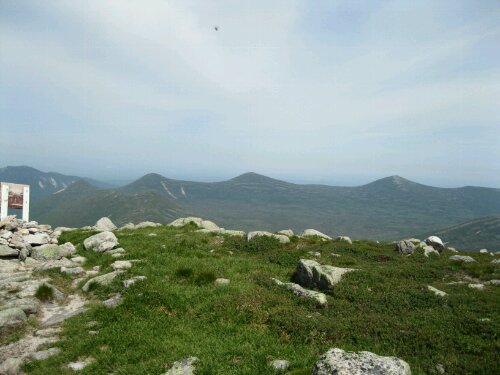 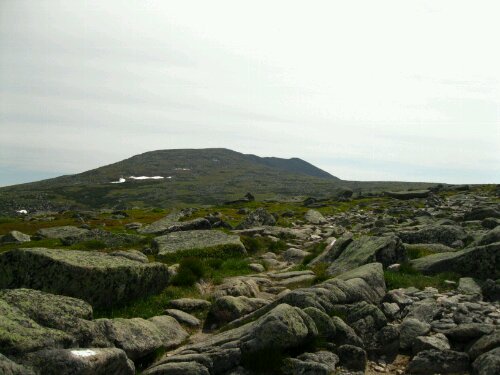 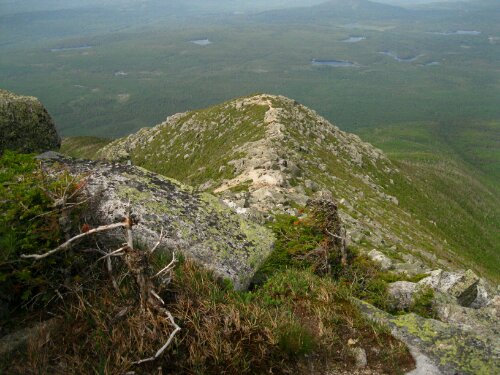 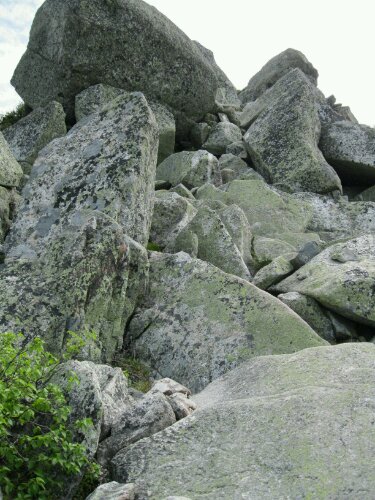 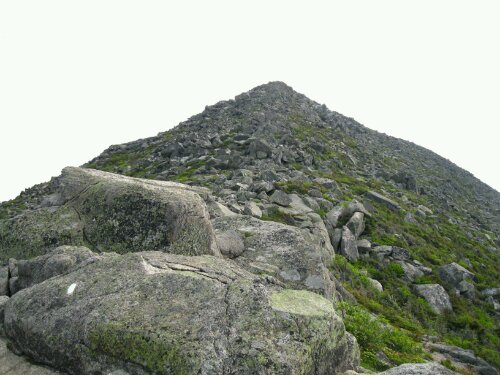 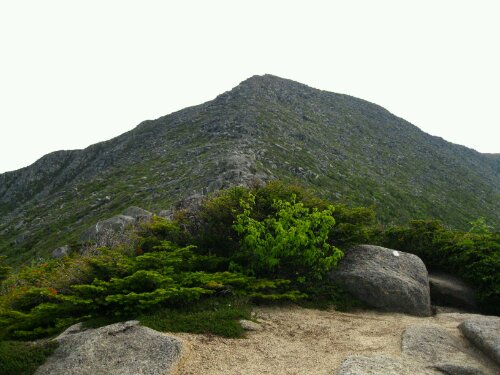 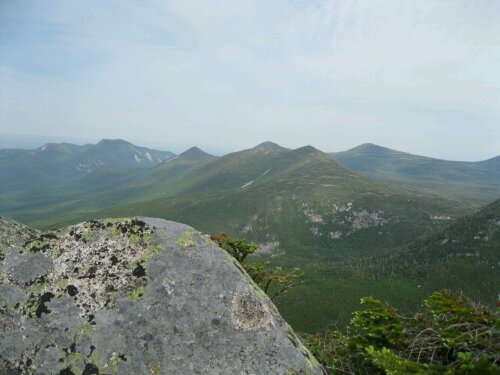 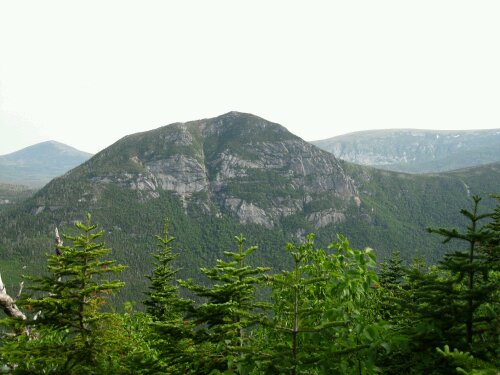 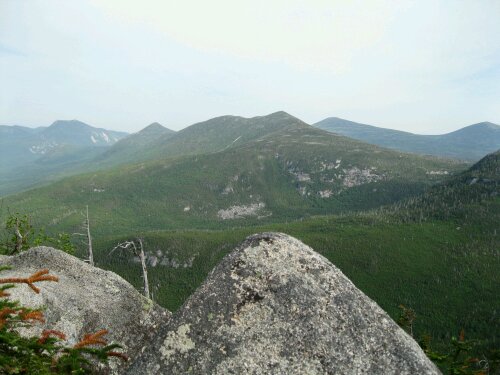 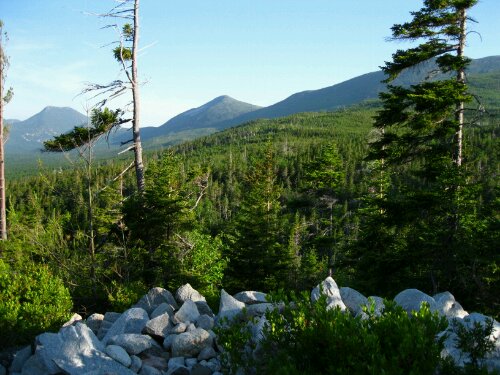 Summiting Mt. Katadihn was absolutely the most terrifying experience of my entire life.

Ok I am not to proud to admit I have a sometimes dibiletating fear of heights. I can say it has gotten ever so slightly better over the years, but no matter how many times I face it never completely goes away.

I am ok in situations where I feel relatively stable and balanced. I have been hiking for many years and climbed many peaks and been fine.

I awoke at 4:30 and started my morning tea, ate some power bars for breakfast, and broke camp separating things I wouldn’t need to take up so that I could store them in the rangers office while I hiked up.

I dropped my non-essentials in the rangers office and headed on to the trail exactly at 6.

As I began my hike up I noted the geographical similarities of the lower end if Mt. Katadihn to many woods I had hiked in upstate NY’s Catskills or Adirondack mountains.

Views of the surrounding mountains began appearing to my left side and they were simply spectacular!

I was really enjoying my hike and moving relatively swiftly for someone who was not in shape. It wasn’t long, maybe 1.5 hours before I started to reach the end of the tree line and the terrain turned rocky.

At first climbing over the rocks wasn’t so bad. It was a pretty good workout and I was moving along well. I reached a point where the climbing became more and more difficult. Soon I wasn’t just climbing over large rocks but struggling to pull myself up and over using more and more of my upper body.

My anxiety level began to increase as the terrain turned steeper and steeper. I came to a point where it required pulling yourself up onto a large boulder via a metal rod in a rock. I pulled myself up onto the rock on my stomach. As I got on top of the rock I realized that the position I had pulled myself into left me pinned on my stomach under the rock above it with no way to stand up to evaluate my next move.

I began to have a panic attack. My heart raced. There seemed no way to make a move forward and I couldn’t see a way back down off the rock I had just pulled myself up on to short of sliding off and dropping 15 feet or so.

I contemplated my options. Lay there until someone else came along, but it was still early and I knew I was first on this trail by at least an hour. Also did I really want to be found wimpering on my stomach like that?

I looked ahead and found a crevice I could slide my fingers into. I remembered climbing shows I had watched on tv and how they demonstrated using your leg strength to push yourself up. With my fingers wedged in a rock ahead I found a slight groove I could place my foot in, took a deep breath and pulled myself up with all of my trembling upper body and pushed with my legs.

I made it safely to the next rock where I was able to stand up and try to calm myself. I wanted to quit right there. My mind was racing as was my heart. I thought of telling people how I hiked the whole AT “except the little bit at the top” I didn’t really care at that point who would have thought what. I was so paralyzed with fear I didn’t care what anyone thought, I didn’t care if I scraped 2 years of plans to hike the trail and quit all together at that point. All I wanted was a way out of the extreme terror my mind was subjecting me to.

I calmed myself and thought of how everyone that does the entire AT has a damn picture of themselves at each of the 2 signs that mark the North and South ends of the trail. If I were going to do this hike I needed that damn picture.

I told myself the rest couldn’t be as bad, it was “just a tricky spot” I looked at the boulders ahead, and decided to press on despite my racing heart and trembling body. As I moved on fear was ripping me apart. My body temperature was fluctuating wildly. I was putting on and taking off shirts, sweat shirts and my wind breaker furiously trying to constantly adjust but never comfortable.

I was de-hydrated, I was drinking so much water but it never seemed enough. I pressed on moving ever so slowly. I just kept thinking of how I needed that damn picture. It was actually good motivation. The need for a good picture was what got me across the Golden Gate despite a almost paralyzing fear on that bridge.

I pressed on for almost 3 hours. Climbing 1 boulder at a time. Still panicing throughout, still trying to calm myself but ever so slowly moving forward just hoping that each boulder climb would be my last.

I finally pulled myself up over the last of the boulders. I thought perhaps I had reached the summit, however I was to find I still had about 45 minutes of walking along the ridge on a slow gradual rocky incline to the top. It wasn’t so bad after that but I thought of the decent down and the weak condition of my body. I was pretty worried about getting down safe.

The views from the top were absolutely stunning!!! There was the sign that marked the Northern Terminus of the Appalachian Trail. I asked a young couple that came up a different route to take a photo of me next to the sign.

I had decided not to decend alone. Troy aka “Super Guide” who I had met on the bus from Portland to Bangor showed up. I wasn’t to keen on him since I overheard him putting gays down on the bus, but I took the opportunity to have someone to climb down with.

The climb down was slow and scary but not as bad since I had company. Troy and I talked as we made our way down and he made some racist statements followed by “I am not prejudiced or anything” I really began to dislike him but it was helpful getting down.

In hindsight several factors contributed to my terror in this situation. Being alone, it was early, I did not eat enough and being very out if shape.

Looking back I try to tell myself it was not that bad. I was being overly dramatic. Lots of people do that climb. I think though I will not be doing it again. I have been warned of the Whites and Presidential Loop in New Hampshire but told its not quite as bad as Katadihn. I have also been told if I can get through that I will breeze through the rest of the trail.