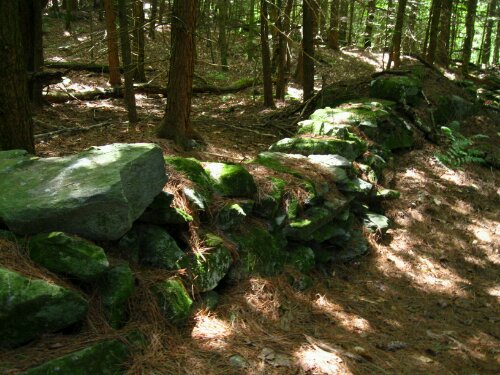 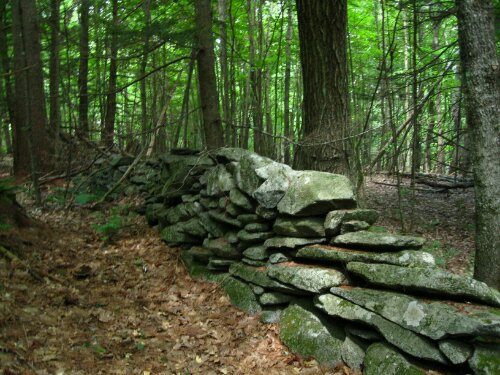 Stone walls such as the ones pictured above are quite common in the woods on the east coast. It doesn’t take a historian to figure out they are fairly old and have been around for quite some time. They are often covered in moss, falling apart and overgrown.

I wonder why they built these walls. At first I thought perhaps they were keeping animals in. People of those times surely kept some animals for food. Chickens perhaps? Cows? In the woods though? Maybe but would such walls wouldn’t be effective with chickens?

Perhaps these were defensive walls. Most are not very high and would not provide great protection. Surely though they would provide sufficient cover against the rifles of those times. I imagined for a moment a minute man ducking behind one of these walls for protection from British soldiers trying to crush our fight for independence.

After imagining reasons of defense or farming logic set in and I realized what I think were the real reasons for these walls. They were more than likely used to mark property boundaries. Nothing too exciting.

I wonder again about the people who lived within these walls. Did they have to walk the 16 miles to Hanover for supplies as I was today? Were they as anxious to get it over as I was or were they so used to such a walk it didn’t bother them much? Are parts of the Appalachian Trail the same paths they walked to town? Would they look forward to a nice big pint of their favorite brew when they got there as I would?:)

It’s funny I never cared for history when I was younger. As I grow older I am fascinated by it. I especially love learning about the people who were in the places I now go long before I am there. Constantly discovering this rich layering of people and history is also one if my favorite reasons for loving New York City so much.

I guess an interest in history comes with age. The realization that our time here is fleeting, that someday others will walk were we have walked and will also wonder of us who  were they?