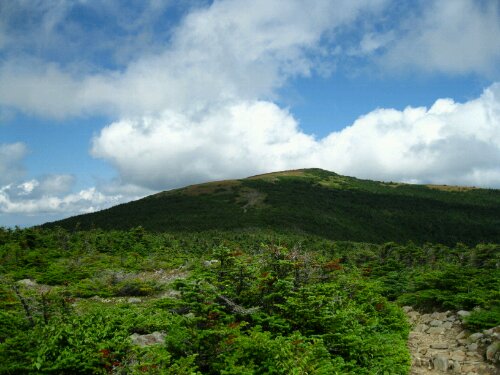 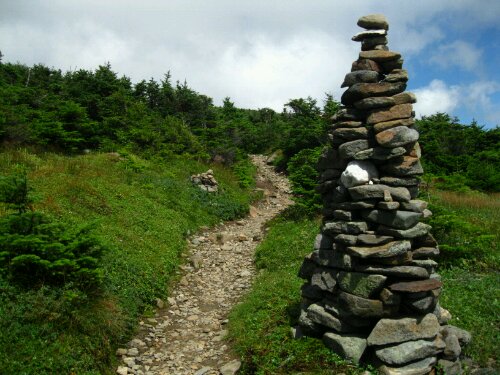 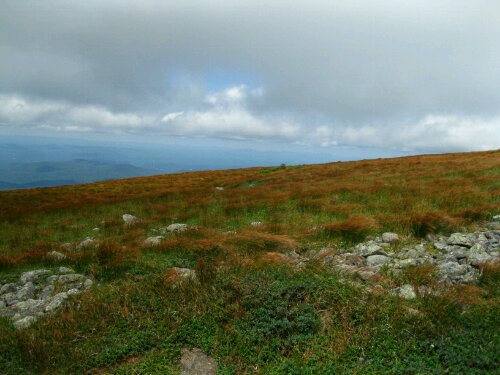 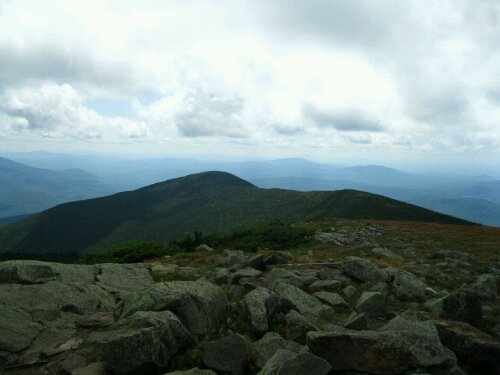 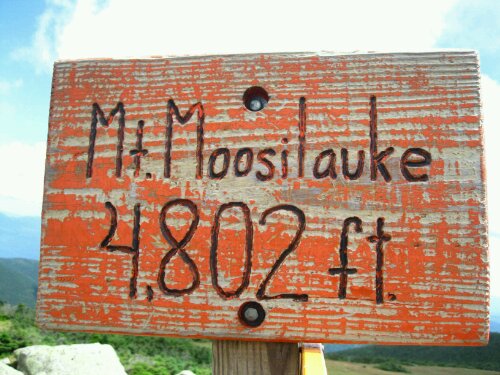 Moosilauke is the last big mountain in the Whites. It was a bit of a tough hike, very steep at times but the weather was great and it was nothing I couldn’t handle at this point in the trip.

The peak was above tree line and very, very windy but absolutely gorgeous. It was well worth the work and made me a little sad to clear such an amazing and incredible section of the trail. I will definitely be back to hike these mountains again! 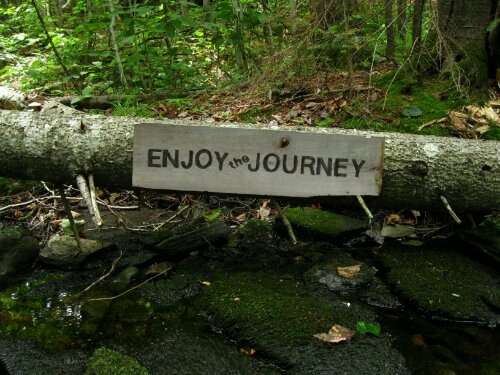 Just before leaving for this hike I wrote in a letter to a friend the following:

I have long believed that the material things we accumulate in life, all of our “things” and “stuff” mean very little.

Thank you  everyone. I have received emails, phone calls, texts and word through the grape vine of your support, following of this journal and encouragement. Your feedback has been incredible!

You are all so great. I am truly lucky to have you in my life. You are all with me every step of the way!!! 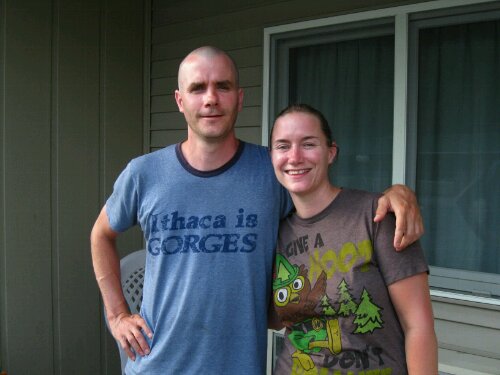 Had to throw in a photo of me and my baby sister:) 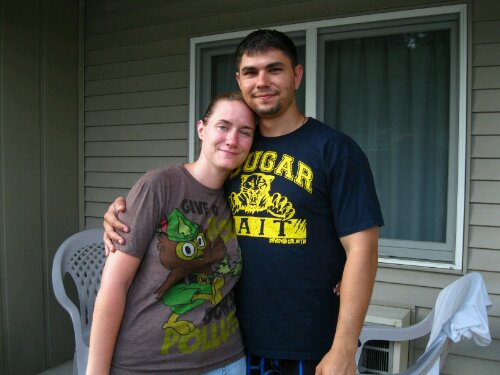 My little sister and her now fiancee Brian were in CT for a visit and had planned to catch me somewhere along the trail for a visit.

They met me ay Kinsman’s Notch just the other side of the Kinsmans Mountains at Franconia Notch. New Hampshire. They had a hotel reserved in North Woodstock.

Just after showing up Erin flashed her brand new engagement ring. Apparently Brian had proposed to her the night before at Crawford Notch sitting on a rock in a stream.

I am very happy for them and wish them all the best!

We had lunch and then went back to the hotel to hang out and catch up. We spent the rest of the day and night talking. It was a great time!!! 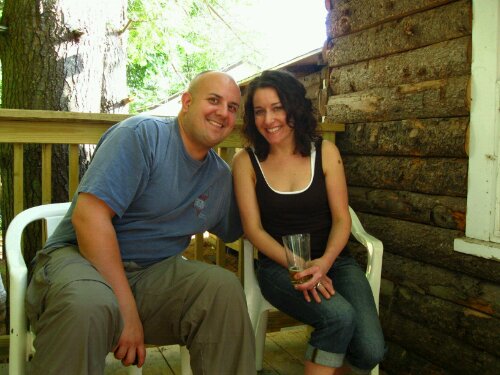 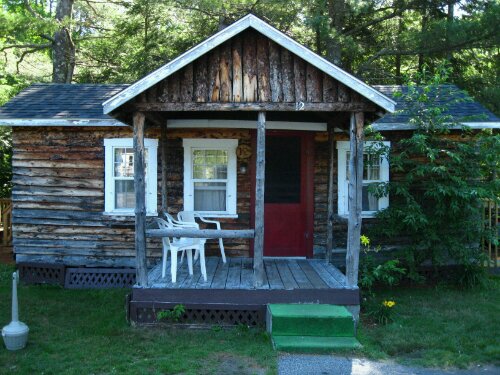 Zach & Rene are 2 long time friends of mine I had not seen in almost 10 years. We had been talking about trying to meet up when I passed somewhere near Franconia Notch since long before I started this hike. They had been vacationing in the area for years and knew how beautiful it is.

As I got closer to Franconia Notch we were able to coordinate a day to meet up and they reserved a cabin near the Notch for 2 nights.

They brought along their Sheltie dog Katie whom I got along well with:)

We had such an amazing time hanging out and talking. We talked about everything catching up on old times and new.  They provided some intellectually stimulating conversations as well as some great laughs. It was exactly what I needed to keep going on this long journey.

It was so great to see them. I am very thankful they spent the time and money to make this happen. I am very, very lucky to have such incredible friends in my life!!! I have definite plans to come back to this area with them and do some more hiking.

While in Lincoln waiting to meet up with some old friends I decided to catch a movie. Inception looked good and the timing was right. 6$ for a matinee, if only NYC could be so cheap!

I really enjoyed the film. It was much better than Leonardio Decaprio’s last film Shutter Island. It was a beautifuly layered complex mind puzzle. Just the mental food my brain was craving. I am very glad I took the time out to watch it.

I have had little problem hitch hiking into towns from the trail. Many people who live near the trail are hikers themselves or have family and friends who have hiked the trail.

My hitch into Lincoln was an interesting one. The guy who picked me up had several bumper stickers touting gun rights and various other right wing organizations. I can put aside politics and be truly grateful for the favor of a ride so I got in.

The man who stopped to pick me up was wearing a mechanics uniform. He was sipping on a Budwiser and smelled pretty strongly of beer. One first words after his hello were “You know there are a lot of similarities between being a hiker and the shape you have to be in to be a trained and efficient killer out there on the battlefield. To be able to kill you know.” He continued on “You really have to be in great shape to be a good killer”

Now…I’m kinda thinking though that’s not exactly the first thing you come out with when meeting a stranger. I can be a little bit of a ball buster so I think I know when someone is just having fun with me or being honest. I think this guy really enjoyed talking about killing. Needless to say when he pulled over to stop and buy more beer despite my luck with hitching so far I became a little on edge.

I played it cool but thoughts of a Pulp Fiction back basement kind of scene ran through my head. I frantically started looking for details, the make and model of the car I was in, anything I could take note of should I need to make a police report at some time.

He got back and we drove on to the Hiker hostel. Everything went ok and there was nothing to worry about but I still think it was a strange way to start a conversation! 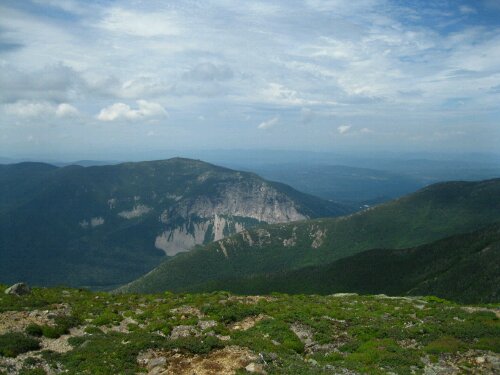 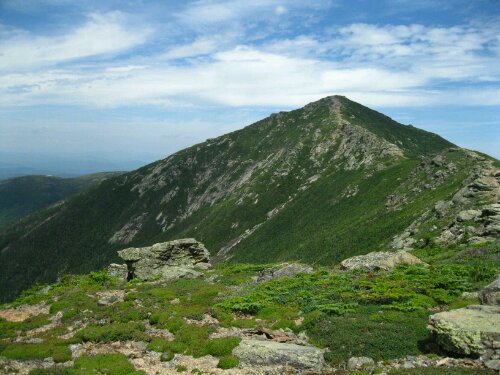 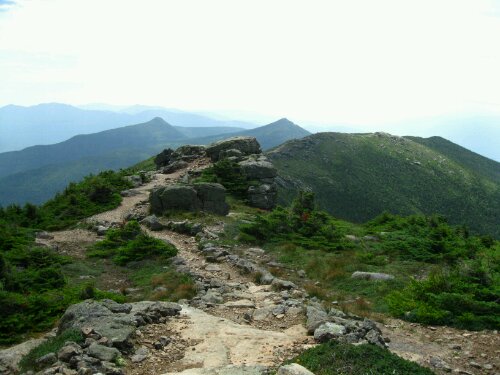 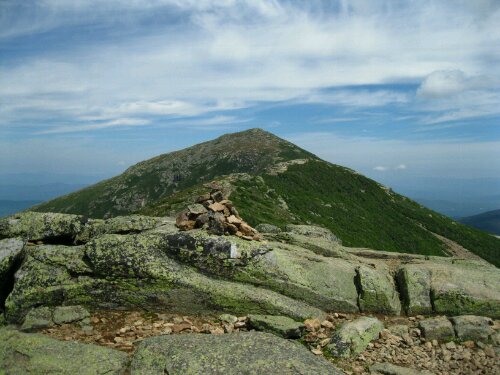 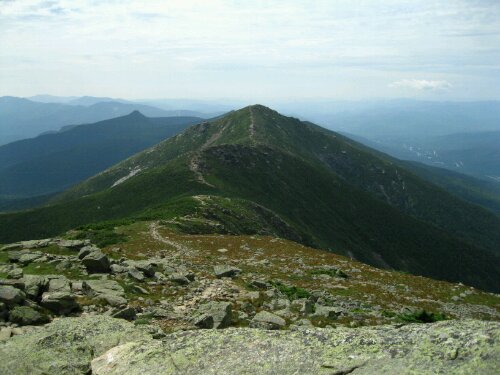 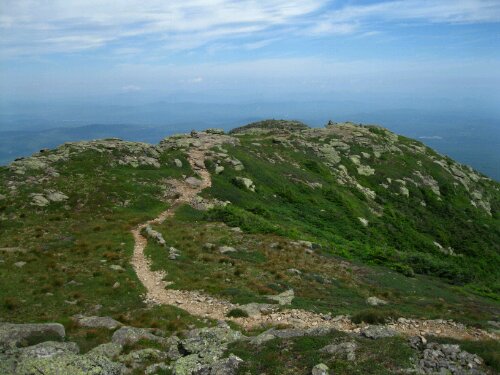 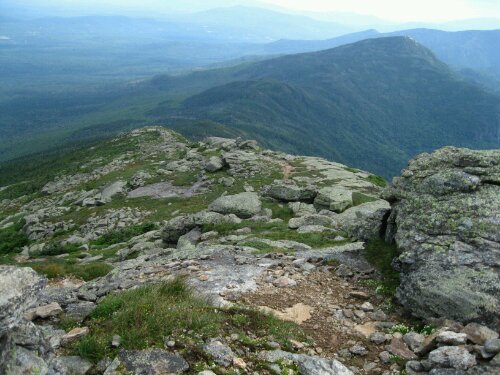 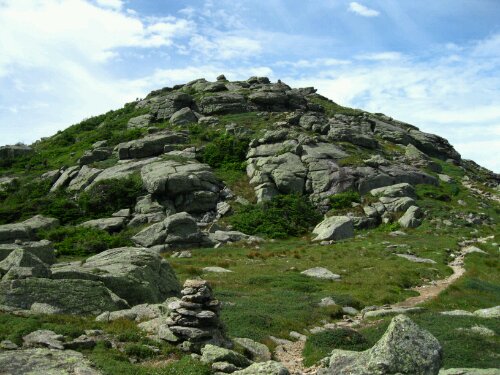 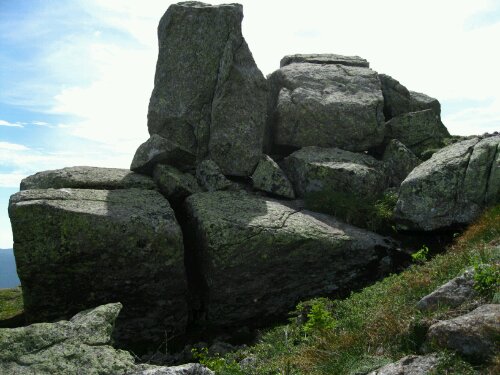 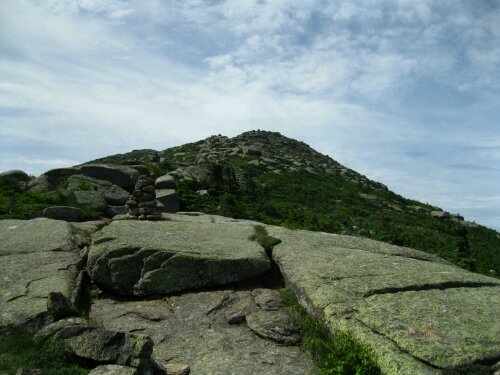 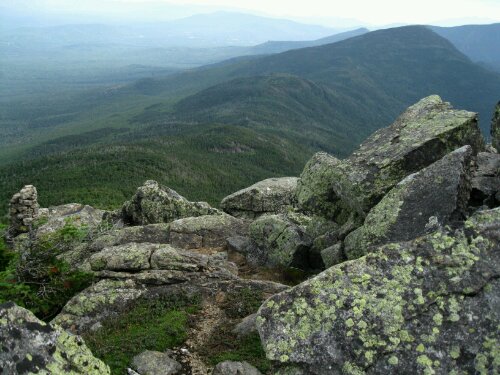 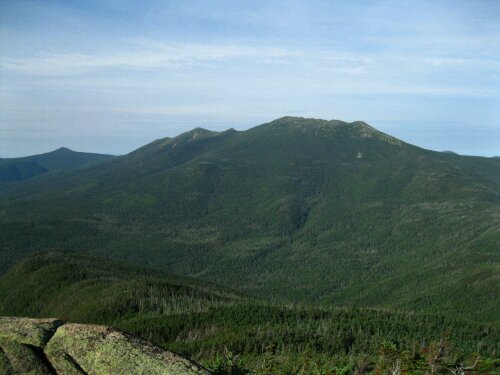 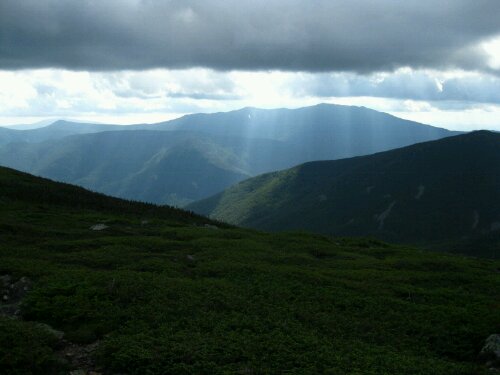 I had heard since I started the trail in Maine how “scary” and “terrifying” the Whites were. Being somewhat afraid of heights and having had the crap scared out of me at Katadihn I was a little more than nervous about the Whites. I had already hiked the biggest mountains Washington and the Presidential range and didn’t find any situation there too scary.

I had guessed everyone must be talking about the upcoming narrow Franconia Ridge. It was the only major section I had left, it must have been the “scary part”

I set out early in the morning hoping to make the cross over the exposed ridge in good weather. I hiked to the top of Garefield Mountain and the view was spectacular. I looked at a ridge across the way and thought to myself “wow the top of that looks thin and scary” not realizing that was the Franconia Ridge I was headed for.

I made my way down Garefield and through some woods. As the trail turned towards the mountains I had seen earlier I put 2 & 2 together and realized that ridge I spotted earlier was Franconia. I pressed on preparing myself for the worst.

As I climbed the first side of the AT leading up to the ridge, the boulders grew large and it was a bit of work but nothing scary. I came up over the top and as I looked at the crossing i thought it didn’t look so scary.

It was incredibly and powerfully beautiful but never scary. Sure it was high but never too thin or to technical. I really, really enjoyed this hike. I’m not sure where the “scary” part of the whites is but this definitely was not it.

Garefield You Must Be Kidding

It rained hard the night before, but had let up after early morning. The forecast was for clearing later in the day but rain later the next afternoon. I originally planned to make 13 miles but as I learned of the forecast I decided to press on 6 more so I could get closer to the Franconia Ridge and hopefully cross it the next morning before storms set in.

19 miles in the Whites was a bit ambitious since the terrain is pretty rough and I had a late start trying to avoid the morning rain. It was tough and muddy all day.

When I decided to make the last 3 mile push from the AMC Galehead hut to the Garefield campsite it was already 7pm. I knew I would be getting in late and even after dark but I really wanted to make Franconia Ridge the next day in good weather so I pushed on.

It got dark and I put on my head lamp. It was my first night hiking experience and the biggest problem I had was not swallowing the moths that were making dive bombs for my head lamp. I was gaining altitude and  it was getting cold. I was soaked in sweat and contemplating “stealth camping” somewhere off the trail. I would run the risk of a ticket but wasn’t sure I could make the campsite.

Just as I was about to give up and set up camp I saw a sign that said “Garefield Ridge Campsite .5” I thought “I can do this, I haven’t met a half mile I couldn’t bang out yet!” I pushed in hard and fast.

I was starting to wonder if I was there yet when I ran smack into a waterfall! I stopped and thought to myself, ok its dark maybe I missed a turn. I looked around frantically for a turn or side trail. Nothing. I deduced the trail actually went straight up the middle of the waterfall.

I said out loud “Garefield you must be kidding!!!” I looked at the waterfall for a way up it without getting wet. It was definitely climbable but the water levels were high from the heavy rains the night before. I knew I wasn’t going to get up this without getting pretty wet.

I wasn’t happy about having to do this, especially in the dark but I made the decision to move fast and get it over with. I climbed up the waterfall as quickly as I could safely manage. It wasn’t an easy climb and I got absolutely soaked.

I made it to camp just as the caretaker was going to bed. I set up my hammock glad to have made it but very wet and cold.

I have learned to keep dry clothes in a zip lock bag for sleeping in. Unfortunately I was wearing my jacket while hiking that night and it was soaked with sweat and waterfall. I could not sleep with it on and at that altitude it was freezing!!! One of the coldest nights sleep I have had yet.